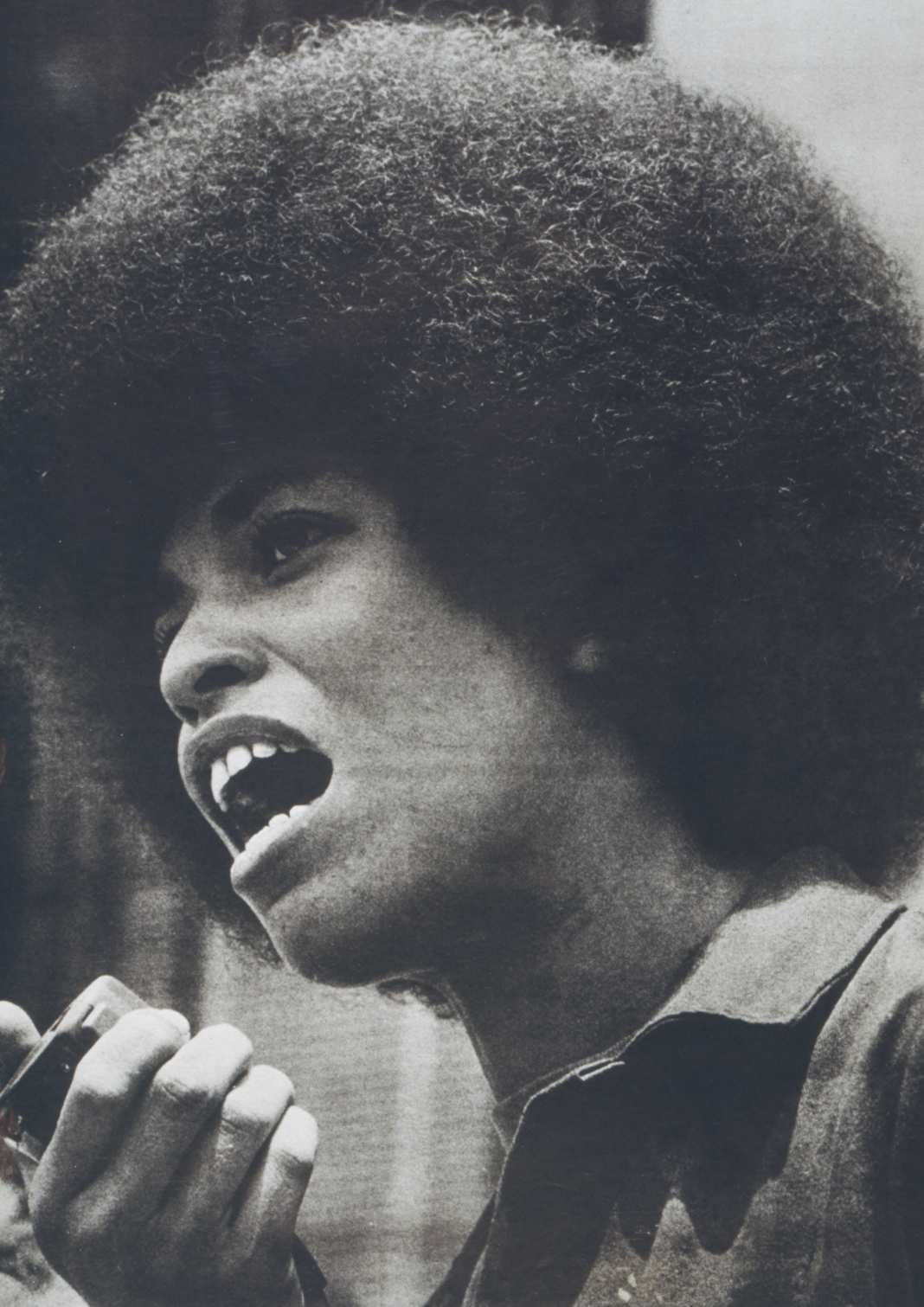 *Editor’s note: This article is an extract from an essay titled ‘The Case of Angela Davis: The Battle of Black Media Representation in a White Supremacist World’ written by Amarah Baig and has been further edited for the purpose of our readers.

How Are White Supremacist Values Perpetuated into the Mainstream News Media?
There is evidence to suggest that the mainstream press profits off ‘scaremongering’ the white community through their portrayal of black criminals, ‘Local news over-represents Black perpetrators…[and] over-represents White victims’[1]. This indicates that ‘representing Blacks far more often in criminal roles than Whites, makes them into symbols of threat’[2]. Through the over-reporting of black people in the news, in the frame of violent stories, a culture of fear is subsequently created in regards to their community. If the news is constantly reporting the crimes of black people, there is no doubt that racial stereotypes will quickly form and disseminate throughout society. This argument can also be applied to the criminal justice system in America, as black communities are so heavily policed and black men are four times more likely to be stopped and searched than white men. Negative stereotypes are bound to form, if that is what your news reports are heavily focused on.

The question arises: why do media outlets create such images of the black community? One theory may be that media corporations exploit their ability to manipulate stories into narratives that insight fear, in hopes of maximising profit. ‘Fear builds the size of an audience…the media simultaneously informs and protects, as well as produces anxiety, fear, and anger’[3]. Ultimately, the goal of a news business is to maximise their audience, and thus maximise their profit, ergo when an audience is intrigued by a possible personal threat, businesses increase in prosperity. This could be just one theory of man; another strong contender is that modern society still has major issues with perpetuating centuries of racism and unconscious bias towards the black community. Where does this bias stem from? The mainstream news media is a key contributor to forming such stereotypes.

In order to escape such damaging stereotypes, organisations such as the Black Panther Party, have used their own media outlets to fight against poor representation. For instance, Shoot to Kill was popular artwork that appeared in the Panther’s very own Black Panther newspaper[4]. This ‘features scenes of black men killing white cops’[5]. The significance of such art work first lies in the fact that the Panthers have developed their own ‘radical’ and underground’ newspaper, as described by Jane Rhodes[6]. The Panthers created their own newspaper in order to deviate away from the white supremacist mainstream press, in a similar fashion to the #BlackLivesMatter activists, so that they could dispel their own message that advocated black liberation. Rhodes says ‘Underground newspapers were written by the alienated for the alienated’[7], which effectively sums up why such a diversion from the mainstream press was needed. Perhaps in the year 2020, social media provides just that for minority groups – a place where the ‘alienated’, misrepresented and ignored community can share their experiences using their very own voice.

Angela Davis and Her Fight for Freedom
The power of self-representation also extended to American political activist Angela Davis. She had to fight for freedom when she was falsely charged for aggravated kidnapping and first degree murder. She was thought to have supplied guns to Jonathon Jackson but was publicly acquitted in 1972 by an all-white jury. One example of how Davis was constructed as a criminal is when she appears on page two of the Chicago Tribune, with the headline reading: ‘FBI Places Angela Davis on List of Its 10 Most Wanted Fugitives’[8]. Fear, panic and distrust is already created in relation to Davis, as she is considered wanted by the FBI – an immensely powerful law enforcement agency. Additionally, by naming her a ‘fugitive’ and not a person, she was dehumanised into a marginalised figure, whom is escaping from the law.

News businesses also took advantage of the fact that the guns from the Courthouse incident were registered in Davis’ name; although it did not prove her guilt, they still utilised this fact in confirming their murderous criminal image of Angela Davis. ‘Court Battle Guns Registered in the Name of Angela Davis’[9] is just one example that very clearly associated Davis’ name with ‘gun’. This not only supports the previous discussion of creating criminal stereotypes of black people, it also confirms the findings of the Kerner Report in highlighting the media’s hyperbolic tendencies. Moreover, Davis is pictured, and described, with her hair ‘in a natural “Afro” fashion. Princess Gabbara of Ebony magazine, describes the afro as a ‘symbol for Black beauty, liberation and pride’ – an outward denial of ‘White supremacy’[10]. This image, in combination with the narrative of Davis’ hostile description, confirms her rejection of westernised ideals of beauty, and thus increases the readerships fear around such a recluse, just as previously stated – fear sells.

News stories regarding Angela Davis’ acquittal had a great shift in tone however, transforming her from a harmful criminal, to a community orientated leader. In Theo Wilsons’ Chicago Tribune piece titled ‘Jury Frees Angela Davis’[11], there is an excessive focus on the emotional outbursts from the acquittal scene. ‘Screams of joy and sobs of relief erupted in Angela Davis’ courtroom today’[12] is the opening line of the article. This highly sensationalised language emotionally connects his readers to the struggle of Davis, erasing all of the previous vicious images that she was associated with, and instead replaces them with a sensational ending. He also connects Davis to the wider struggle for black prisoners, including a direct quote from Angela, ‘“We are going to launch a campaign to free all oppressed people”’[13]. This is, again, supporting the argument that the media’s tone has changed from Davis being disconnected, to a family orientated emotional female, campaigning for all oppressed people. Angela Davis is now a character that the mainstream American public can empathise with.

When questioned by a reporter whether you need to use ‘confrontation’ and ‘violence’ in order to start a revolution, Davis provides the opposite argument and explains why black people are seen to be violent; it is needed as a form of defence against a racist society. ‘When someone asks me about violence I just…I just find it incredible because what it means is that the person that’s asking that question has absolutely no idea what black people have gone through’[14]. Davis not only critiques the media in her revised Autobiography, she also does so within the immediacy of an interview.

This opinion extends to our news outlets today in the UK, during the George Floyd protests we were met with headlines focusing on the ‘Violent Clashes with Police’ and ‘Sickening Violence’. Although the protests did result on some clashes with law enforcement, we must question why there was such a focus on the ‘violence’ of the protesters, and not on the need for revolution. Davis is wholly aware of the roles and responsibilities of the news reporter; a position that has to ability to confirm and perpetuate negative stereotypes as a result of historical and social ignorance to the black struggle, which still stands today.

Using Twitter as a Form of Self-representation: What is the Impact of #BlackLivesMatter in the UK?
By reflecting on the impact of the Free Angela campaign, and the emergence of the Black Panther Newspaper, one can appreciate the power of taking control of your story and publishing it on your own terms. Today, Twitter users are seeking to explore their experiences of inequality through the online hashtag #BlackLivesMatter – allowing people from all walks of life to tweet, retweet and document their experiences of inequality in the hopes of raising awareness and instigating change.

To some extent this has been incredibly successful in creating solidarity between communities from all over the globe. In the UK, Premier League footballers have ‘taken a knee’ to protest the excessive use of police brutality against minority groups and have shown their support, statues of former slave traders have been taken down and individuals have been forced to reflect upon their privilege. Additionally, some schools are reforming and diversifying their curriculums to include powerful black voices, past school leavers have requested that they consider moving away from putting the spotlight on the ‘victim’ of racism or slavery and to move towards a focus on black excellence and power.

Albeit the Black Lives Matter movement has spurred positive change around the world, allowing thousands of people to voice their experiences, we cannot ignore the facts that the murderers of innocent black people walk free and have the support of their white allies. White supremacy is a structure that continues to permeate throughout our society, however through utilising our individual voices through #BlackLivesMatter, we may continue to press for change and equality for all. We can take back the power of representation.