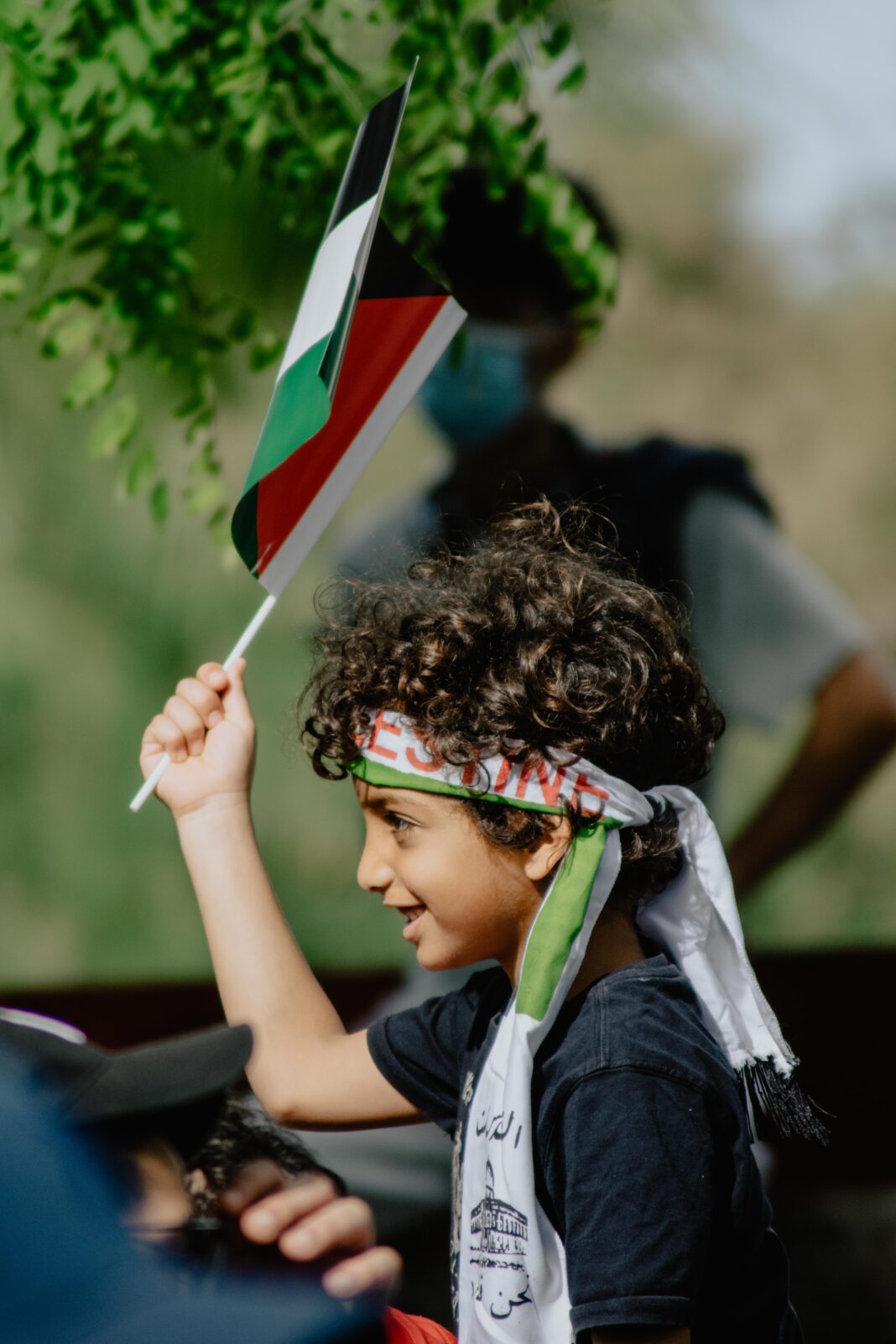 “There’s really no such thing as the ‘voiceless’. There are only the deliberately silenced, or the preferably unheard” – Arundhati Roy.

I feel as though, with the current situation in the Middle East, we are having another watershed moment. A moment that is providing us all with learning opportunities that we can ill-afford to miss out on. The classroom really is the best place for these conversations.

I want to take you back to 2006. As I gazed out the classroom window and my Geography teacher, who we will call, ‘Mr. O’ told us to turn to page 89 in our atlases. I repeatedly tried to make out the name of the country in the Middle East. “P-P-P-Palestine,” I said, which was met with the comment “get out of my room.” As my peers looked on in shock, I didn’t know what I did wrong. For the next two days, I spent my time exclusively in the school’s internal exclusion room, completing several statements and yet, no one had told me what I had done wrong. It wasn’t explained to my parents either, but I felt pressured to apologise for saying the name of a country. All these years on, still no explanation provided, I am seeing a vicious cycle of aggression and, well, ‘cancellations’ for mentioning Palestine.

The gravity of words
Understanding the gravity of our words is so vital. Words can give and take life in equal measure. This cycle of silence and denial of world events prevents meaningful solutions, sustained dialogue and we have seen how silence leads to complicity. Similarly, how invalidating behaviours can make others cast doubt on their own emotions and experiences. Over the past two weeks or so, we have heard about simmering tensions in the Israel-Palestine region. With this very contentious topic, a common theme is a cycle where the only victory is disagreement. There have been casualties and fatalities in both countries. However, highlighting disproportionate aggression, calling for universal human rights and stating that a peaceful resolution is what is needed right now. Schools are in a very precarious position. In fact, the safeguarding implications that silencing conversations could cause are so enormous.

Let’s also make this very clear – we must condemn anti-Semitism at every given opportunity. It should not and will not be tolerated in our schools. All forms of discrimination are appalling and there is no excuse for it. By no means should anyone pardon it? With every interaction comes a learning opportunity and I believe right now, the time has come for educators to be brave and embrace a learning opportunity. Again, the classroom really is the best place for these conversations.

Hearing of schools expelling Muslim students for saying “Free Palestine” does exactly what? Seeing a Headteacher publicly call the Palestinian flag a “call to arms” and a symbol of anti-Semitism. But, just like the relations in the Middle East, this isn’t a black and white binary. Of course, we have those who conflate messages with their own racist tendencies and must be fully aware of this. Something is wrong here. We are losing valuable learning opportunities. This is a broken system that needs to be challenged. But, have schools stopped to ask:

Just like the BLM movement last year, the current sensitive situation around the Middle East requires such intricate training, reflection, and time and space to be carefully unpacked. Many of our students feel as though it is not only their human right but also their right as a British citizen to protest and hold conversations that matter to them. Words have gravity and we wear the weight of what we see and hear. Again, I believe this could be such a watershed moment in education for us all.

Apolitical free speech: the oxymoron.
I once queried a student for wearing a wristband with the Ukrainian colours at the height of the 2014 crisis in Crimea. This intelligent young man spoke to me in-depth about what was happening in Crimea. He repeatedly told me that his stance was humanitarian but was deemed a marginal militant one. Maybe, just maybe, we don’t give young people the credit they deserve. Maybe, instead of seeing them as empty shells that we must fill as educators with our subject knowledge, young people are autonomously seeing the world around them and forming their own opinions. Again, any humanitarian issues are innately and inherently political, as most humanitarian crises are the result of political decisions.

As educators, we tow a fine line. But do we begin shutting down conversations because they don’t neatly fit the unchallenged normative binaries that we are so accustomed to? Saying “Black Lives Matter” does not mean all lives don’t matter. You would have thought by now, after much reflection, we would be at a stage where we could consider rather than dismiss the grievances of others. Let’s say, a child in our class does say, “Free Palestine” – are we right to hand out a punitive punishment and subsequently dismiss them? A school should be a place for education and direction. Of course, we must stamp out racism, yet alongside this must come a robust system to educate. We must ask: are educators, within their respected contexts trained well enough to deal with the plethora of global issues that permeate into their classroom? Again, schools up and down the country are having this very difficult conversation. Do we police other forms of discrimination (sexism, Islamophobia, etc.) with the same iron fist the way we silence conversations about Palestine? Are we alienating and invalidating the young people when they wish to hold a conversation that matters to them and their community? Again, the classroom really is the best place for these conversations.

Steps forwards
As always, we have some solutions that are worth reflecting on. Albeit not an exhaustive list, let’s consider proactive steps forwards.

1. Training – seeking and reflecting
The need for high-quality anti-racism training is of paramount importance. I firmly believe all the shutting down and shouting down of conversations relating to the Middle East is because there is a lack of awareness and training. Perhaps also, most glaringly too, the unwillingness of School Leaders and those working in education to reflect and undertake this training. Our knee-jerk reaction when we hear something that doesn’t quite fit our narrative is to either go on the defensive or shut down the conversation. In doing so, do we close avenues for reflection to educate and even re-educate ourselves and our students? When a student says “Free Palestine”, are we willing to ask why they feel as though Palestine needs to be free? Do we consider the safeguarding regulations around where they have got their information from? Are we signposting them? Shying away and claiming silence does exactly what? Young people will carry on talking about what hurts them regardless of how much we police them. Again, the classroom really is the best place for these conversations. It is vital that we educate ourselves, continue the dialogue and reflect on our global issues. Our classrooms are not bubbles (no pun intended in our COVID times), as they are a miniature version of society and the best place for us to support our young people. Training and self-reflection are of paramount importance. I am certain any educator with a vested interest in providing equitable life chances for all will be happy to signpost you.

2. Safe spaces – making them exist
Is the classroom a safe space for all young people? We all like to think that our students can approach us with a concern and that we can signpost them. The terrifyingly graphic images of children being killed, buildings and places of worship being destroyed. This secondary trauma caused by such imagery is overwhelming. Our young people are constantly bombarded with media, so much so that it becomes impossible for them to avoid it. However, is there a safe and neutral place for them to discuss what they have seen? Is there a willingness amongst educators to hold these very difficult conversations? After hearing an audio on social media where a teacher told a student that he was categorically wrong for saying people were being killed in Palestine, shockingly this teacher began to guilt-trip the child. Did this teacher value or even consider the opinion of this child? Are schools providing a safe space for education and re-education? How can anyone think the child – and let’s make this clear, he was a child – will feel after being punished for making a comment? When did we begin to render children voiceless? When did we begin to lose our compassion? We serve the communities in which our schools are embedded in this we should be condemning and praising in equal measure.

Safe spaces; if they don’t exist, make them exist. Be that child’s safe space. Educate them in that safe space. If not your classroom, where else is truly safe for them?

3. Educate – liberate, don’t police and pacify
With training and safe spaces, educating our young people on the facts is imperative. We are utterly bombarded by information and misinformation, news and fake news, truth and lies. These are very uncomfortable conversations. This is unchartered terrain. At a time where various PSHE frameworks mention notions of “victim narratives”, teaching factually correct as opposed to ideologically vested versions of the truth is key. Every micro-interaction, every disruption to a lesson, every raised hand in class, all of it! All of these are incredible opportunities to learn from one another. I have had student racially abuse me but returning with an aggressive tone or seeking disproportionate sanctions leads to what, exactly? An opportunity to speak to the young person who has said something awful, trying to understand where these views come from and thus signposting them, this is how we proceed forwards. This is not easy and, for example, having a child shout “Free Palestine” can put us on the back foot. Yet, unless we address it with sensitivity, such conversations leave the vicinity of the classroom. They become detached from the safe space we have developed which perpetuates further silence. Silence is not the answer. As educators, we should be immersing ourselves in current affairs as they permeate into our classroom. We can thus have the pedagogical toolkit ready and to hand to tackle issues that affect our learners.

In summary
The rise of racism in any forms is horrific and must be challenged and questioned. We must move away from neat binaries which are both divisive and delegitimise the real grievances others are feeling. Seeking a peaceful solution to the crisis in the Middle East requires us to be aware of the atrocities of both opposing sides; to consider humanity and loss in equal measure. Although there is no straightforward solution to this situation, we must remember that once upon a time the three religions that descend from the same Prophet (Abraham) have more in common than we are allowed to believe.

I urge educators to start another period of reflection. Punitive sanctions, shouting down conversations and invalidating behaviours is not the way forwards. Not forgetting that both silence and apathy are political stances also. We have a professional responsibility and duty to make all young people feel valued and respected. But refusing to do so, this pushes, often our most vulnerable young people into avenues and forums that are not protected by statutory safeguarding the way educational establishments are. Please think about it. The classroom really is the best place to hold these conversations.