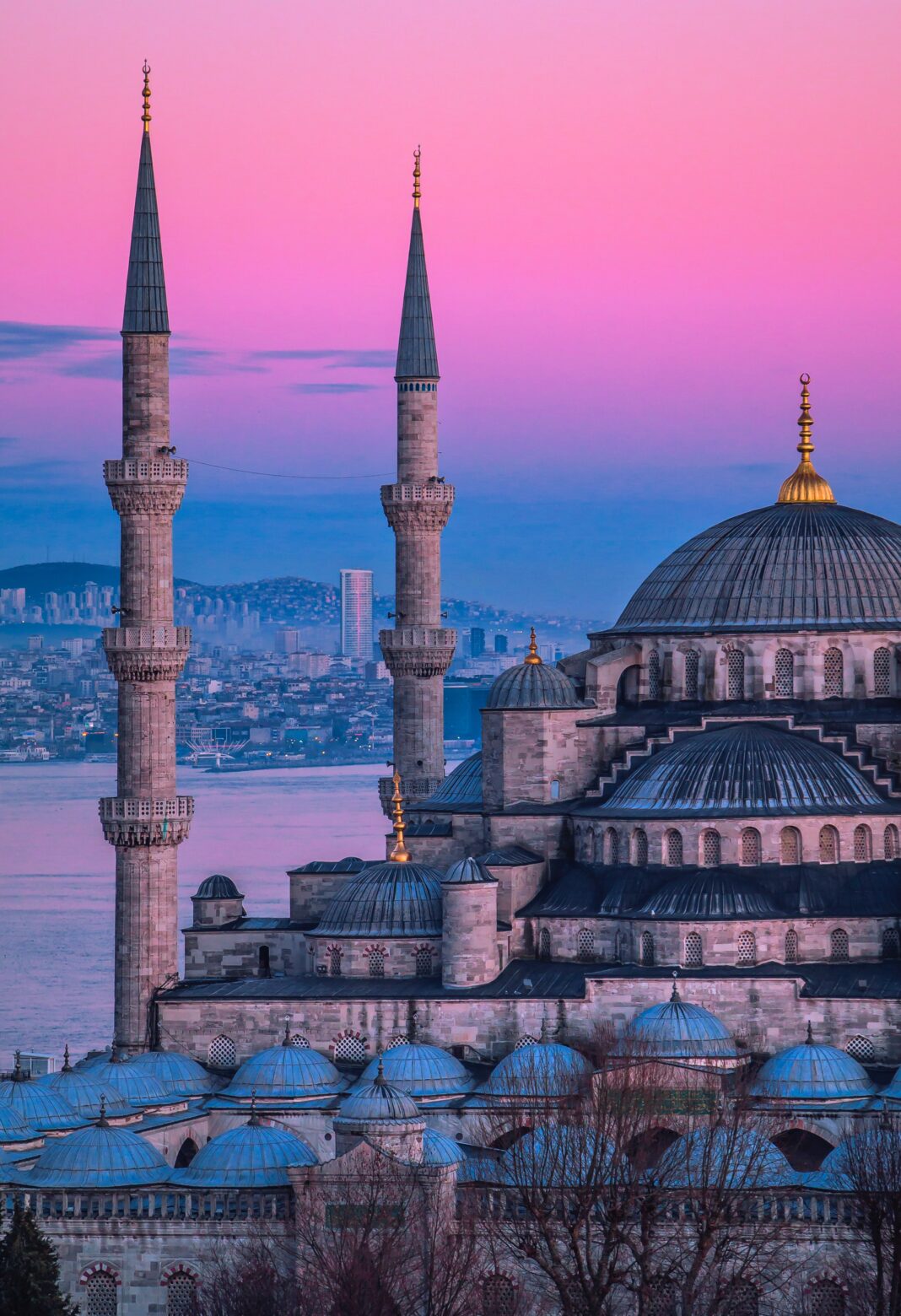 One of the most monumental Islamic structures in the world is the Blue Mosque; the seventeenth largest Mosque in the world which can accommodate up to ten thousand people. The architectural magnificence of this mosque makes it a must-see whilst visiting Istanbul. The mosque is famously called the “Blue Mosque” due to its interior which contains over twenty thousand blue Iznik Tiles. Commonly known as the Blue Mosque, its official name is the Sultan Ahmed Mosque.

The Mosque came under construction in 1609 and finished in 1616.  It is named after Sultan Ahmed, who ruled the Ottoman Empire from 1603 until his death in 1617. The Sultan wanted to create a mosque which would rival the Hagia Sophia directly opposite to it.  The Hagia Sophia’s architecture inspired the aesthetic elements of the Blue Mosque and even the Sehzade Mosque and the Suleymaniye Mosque.

The Blue Mosque is located in the city of Istanbul which may not seem so abstract now but during the time of its construction, it was more common for mosques to be constructed further from the center of the city as to encourage urban development.  The location of the Blue Mosque also caused some alarm as palaces owned by Ottoman ministers were demolished during its construction. Its location is also significant, displaying the triumph of Islamic architecture by lying directly opposite of the Hagia Sophia.

The interior of the mosque contributes to the reason of its name. It contains over 20,000 handmade ceramic tiles, which were made in the Iznik City now known as Nicaea.  There are more than 200 glass-stained windows, allowing natural light to come into the place of worship.  Seyyid Kasim Gubari, who at the time was regarded as an accomplished calligraphist and to an extent the greatest calligrapher at the time, was instructed to do Islamic calligraphy of the mosque.

The carpets are donated to the mosque and are regularly changed due to wear and tear.  Each semi dome has 14 windows and the central dome has 28 windows. The colored glass in the mosque was given to the Prince as a gift from the Signoria of Venice. Perhaps the most vital of the interior designs is the Mihrab, which is carved and sculptured marble. On the right of the Mihrab is the Minber where the imam gives his sermons before the Midday Friday prayers. The mosque is designed in such a way where everyone in the building, even if it is at capacity, can hear and see the imam. It is generally closed for tourists five times a day for prayers. The prayer times are before dawn, midday, afternoon, sunset and at night.

The mosque exterior features six minarets; three on the left side and three on the right. Standing at around 689 feet, they pierce through the skyline and make it stand out across Istanbul.  The minarets initially caused controversy as the Harem Mosque in Mecca also had six minarets. The Harem is the holiest Islamic sight in the world, so the Sultan sent one of his personal architects to Mecca to construct a seventh minaret as to not suggest that the Blue Mosque was superior to the Harem.

In the past Grand Mosques were constructed as to show prosperity or political strength – the Blue Mosque doesn’t tend to follow the same pattern. It was constructed in a time where The Sultan wasn’t able to fully adhere to the responsibilities of leading the Ottoman Empire. He was thirteen when he assumed the throne.  As a young royal he showed signs of weakness, especially in the Treaty of Zsutvatorok, which was signed in 1606. The treaty was unfavorable for the empire as it resulted in the abolishment of the annual tribute, which was paid by Austria.  Also, during his reign he lost the control of territories such as Georgia and Azerbaijan in the Ottoman-Safavid War. The most notable achievements of the Young Sultan would have to be the construction of the Blue Mosque – it’s known all over the world and is visited by Muslims and tourists who are pleasantly amazed by the architectural achievements of the Mosque.